I get a lot of questions from people about what “futures contract roll” is. Today, we’re going to discuss it.

Futures contracts expire quarterly. Just like options, the expiration is the third Friday of the month. The expiration months are March, June, September, and December. Each contract has a different symbol, so if you take the ES (S&P e-mini futures contract) and add the last digit of the year.

Thus, ES M1 is the June 2011 ES contract that expires a week from Friday.

Traders typically trade the contract that is coming up for expiration next because that is where the action is. In other words, the December contract might be trading already, but it has almost not volume and is essentially illiquid. Hedgers use that contract. Traders don’t.

However, traders also don’t wait until the day of expiration to start trading the new contract. They don’t want to risk owning the contract through delivery. It is widely accepted that on the Thursday one week prior to expiration, the volume shifts to the new contract.

So, let’s have a look at how this works. Here’s the ES JUNE contract showing 5-minute bars and trading data for Tuesday and Wednesday of this week: 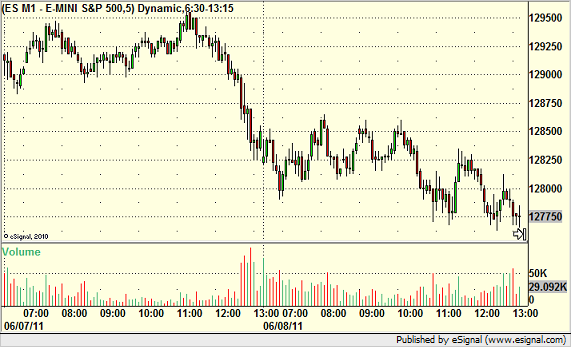 Notice that the biggest volume bars are just over 50,000 contracts per 5-minutes and it closed at 1277.50 on Wednesday.

Now, let’s look at the September contract over the same two days: 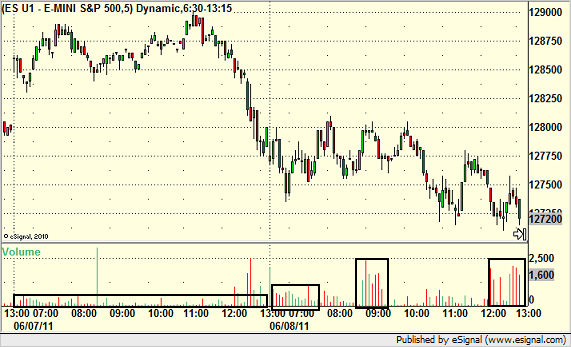 Notice that there’s barely any volume. The best volume bars are 2500 contracts per 5 minutes. However, notice that it did start to pick up Wednesday, especially at the close. Also, notice that it closed at 1272.00.

So here’s the problem. At some point the traders want to shift into the September contract. That occurs generally today (Thursday). However, the pricing is different. If we were to take and calculate a Pivot series based on the June contract activity on Wednesday, here’s how it lines up on the June contract for today’s action (we’re about halfway through the day): 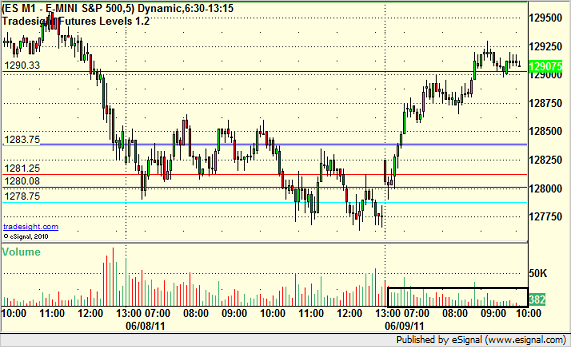 The Value Area makes sense. The Levels are what they are, but notice that the volume is clearly lower today.

Here’s why. Take a look at the September contract now: 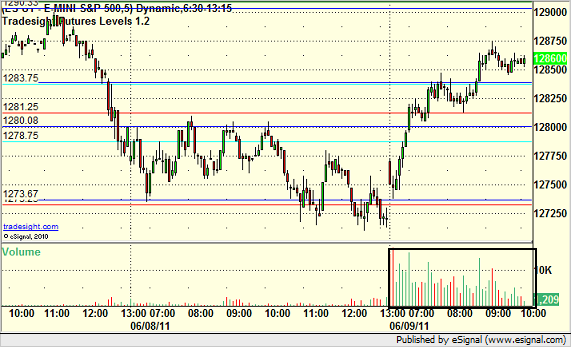 Clearly, the volume has moved. But, notice the Levels on that chart. Since the ES September contract is moving basically identically to the June contract, but is 5 points lower, the Value Area is clearly wrong. The Pivots, also, don’t match up.

So you have a case here where traders are now starting to trade the September contract, but technical tools like the Pivot series and Value Areas should be based on where the volume was YESTERDAY, which was the June contract, and that is a different set of numbers.

Why does this matter? Because this phenomenon discourages technical traders from trading as much on Thursday because their tools are wrong. By tomorrow (Friday) the data will be based on the September contract because the volume is all there, so things like the Pivot series will line up once again with the contract that traders are trading.

What this means in short form is that on the Thursday prior to quarterly expiration, you typically get a lighter volume day IN THE STOCK MARKET IN GENERAL because technical futures traders have less of their tools, and futures trading also drives the stock market in many ways. And sure enough, today is the lightest volume day of the week for stocks.

Put that in the file of “things every professional trader should know.”